In front of the LinuxTag 2008 is a FAD like last year. Mostly for briefing and organizing the open issues about LinuxTag, but there is a lot of other stuff to discuss about Fedora in Europe, too. This FAD will be hold at Berlin at May 27, 2008. Like at the other FADs we would like to have a Country overviews of the participating countries. Details about all other European countries are welcome too. Please use this template at the Fedora wiki. I hope that two months are enough to get this information...if there are no volunteers I will assign this job to you ;-) Please visit http://fedoraproject.org/wiki/FAD/FADLinuxTag2008 for more details about the FAD. Btw, there is a section "Attendees". Add yourself to the list if you are able to join us at this FAD or you are an attendee at LinuxTag. More details about the exact location and time will follow as soon as this information is available.

The next EMEA Ambassador Meeting will be at Wednesday, April 16th, 2008 Add your topics to the meeting page.

If you are an ambassador and come to LinuxTag 2008 you can order again the Fedora Ambassadors Poloshirts. Maybe one ambassador of your country attend there, then you should also order and instruct him to bring and ship it if he/she is back. We have to pay around 25-30€ per shirt to the manufacturer - you reimburse the Fedora EMEA NPO on LinuxTag 2008 in exchange for your PoloShirt(s). Add your name and common informations to the list on the Wiki. Deadline 25. April 2008 08:00 PM UTC

In Europe the end of May is full of events...

If you have a lot of time, here is your schedule for May ;-)

*) so far no confirmed Fedora attendence. If your are able to take care of one of those events, add yourself as owner at the Fedora Event page.

The second day started as busy as the first one. I guess this was basically because the talk of Alan was the first one of the day. Everybody wanted to listen to his talk. 20 min before he started most seats in the room were already occupied. 10 min before the start there was no more standing room. 5 min later there was a 2 m long queue in front of the door. For us this was perfect because our booth was not far away from the door and so were able to grab all visitors who haven't found a seat.

Alan became a Cypertool from the OpenExpo organization team for his talk. And what did Alan with this gift? He decided to pass this tool to us and Joerg and I agreed that we take it as a donation for the Fedora EventBox. So far the tool has a place in my personal EventBox till the "real" EventBox is available in Europe. Alan, thank you very much.

Jan brought his OLPC along with a newer software version than the one of Joerg. Joerg was a bit jealousy and during the afternoon he started to update the OLPC from Seth. The formating process is very interesting. After the update Jan and Joerg tried to get the collaboration stuff to work. It took some time but at the end it worked. Only very slowly, but that unimportant. Because there was a big interest in the XO we gave out some flyers from the OLPC Switzerland Project and a report of a pilot study. As a countertrade they told the people about Fedora and gave away our flyers.

Slowly the communities are becoming bigger and bigger and I guess that's the point why a lot of university are interested in this processes. On Wednesday Joerg was interviewed by a guy from the University of Berne. Today it was my turn. A guy from the University of Munich asked me a lot of questions about the Fedora community, how we works, how the leadership is guiding us, how we are making decisions, what influences Red Hat has, what the ways are for building a good working community, and so on and on. At the end it took 40 min to answer all his questions. I guess that Max will kick my ass when we meet the next time because I have definitely a lack of knowledge about the work and the influence of the board, the position and the exact role of the community manager and the handling of important decisions which affects Red Hat and Fedora. Next time I will be more prepared, I promise...

As usual the event was in a familiar atmosphere and it's was very good to meet a lot of people from the last OpenExpo and other projects again.

Some remarks...
Now it's time to say "thank you" to all attendees. I like to thanks Frederik Bijlsma from Red Hat Frankfurt to provide us with a lot of Fedora 8 Install DVDs and helping at the booth. Again Alan Cox for the donation of the cybertool for the European Eventbox and that he hanged out a lot of hours at our booth and make people stop. Jan Wildeboer for his sweeping lightning talk during the social event and for taking care of the business interested visitors who have any questions about RHEL. A big thank goes to red (Sandro Mathys) for taking care of the install zone and Timea Rusz for helping at the booth, too. Joerg Simon for bringing all the stuff from FOSDEM like the posters, textile banners, Live media, t-shirts, and the XO. Without their help it would not have been possible to cover this event.

My pictures will be online soon.

The long first day of OpenExpo 2008 at Berne is over and the XO is still a good way to make the visitors stop at our booth. In Switzerland a lot of people have heard about the XO but never seen one and/or never had the possibility to play with. Most of them would like to pay for two and get one because it would be a very cool gift. To enter the fair ground 90 min before the official opening time to setup the booth is definitely to early. We were a bit lonely. Our "booth" has a small table, four chairs and a wall for Mo's poster. We also reuse some banners that Joerg has produced for FOSDEM. We splited our group because we had to handle the booth and the install zone. red decided to start at the install zone (he stayed the whole day there at the end) and Joerg, Timea und I managed the booth. My feeling were that there are more people around from beginning than in autumn 2007 at Zurich. It was a very good idea to have some flyers because often visitors only wanted some information about Fedora. Frederik Bijlsma arrived after a long train passage, unpacked the Fedora install DVDs, overlaid a "I am Fedora" t-shirt, and started to help us at the booth. Alan arrived before lunch time, too. OpenExpo provided snacks and drinks for free for all attendees for lunch, as always. Power plugs are different. You can build every interesting constructions to bring a UK plug in a swiss plug. And of course there aren't never enough places free for all those European laptop power adapters and it's good to have a "modified" version of a power distribution unit somewhere (unfortunately this device was 10 min away by foot). I have already learned my lessons during past events...I met a lot of people during the afternoon who are very happy with their system and Fedora. Amazingly one guy told me that he is using Fedora on a lot of web servers in a productive environment and that he still have two machines with Fedora Core 1 (he didn't express any details about the usage of this systems). One big issue are still the codecs. 5 to 6 people asked me how they can configure their systems to play DVDs or mp3. Why never ask anybody something about the synchronization of a mobile phone with Linux or something like that? I guess that there is no need for such things...DVD playback cares everyone. The operator of a well known search engine sponsored the social event. There were some lightning talks and some Freebeer. We sat together around a table and chatted a lit bit. Slowly I was getting tired and we went along with Joerg because he didn't know exactly where his hotel was. Tomorrow will be a new day and don't forget: Fedora always leads, never follows...

Matthias Kranz will lead the monthly Ambassadors meeting for EMEA at March 12th because I will attend the OpenExpo. Please add all your topic to the meeting page with your name. Thank you. 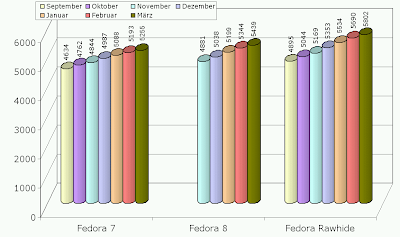